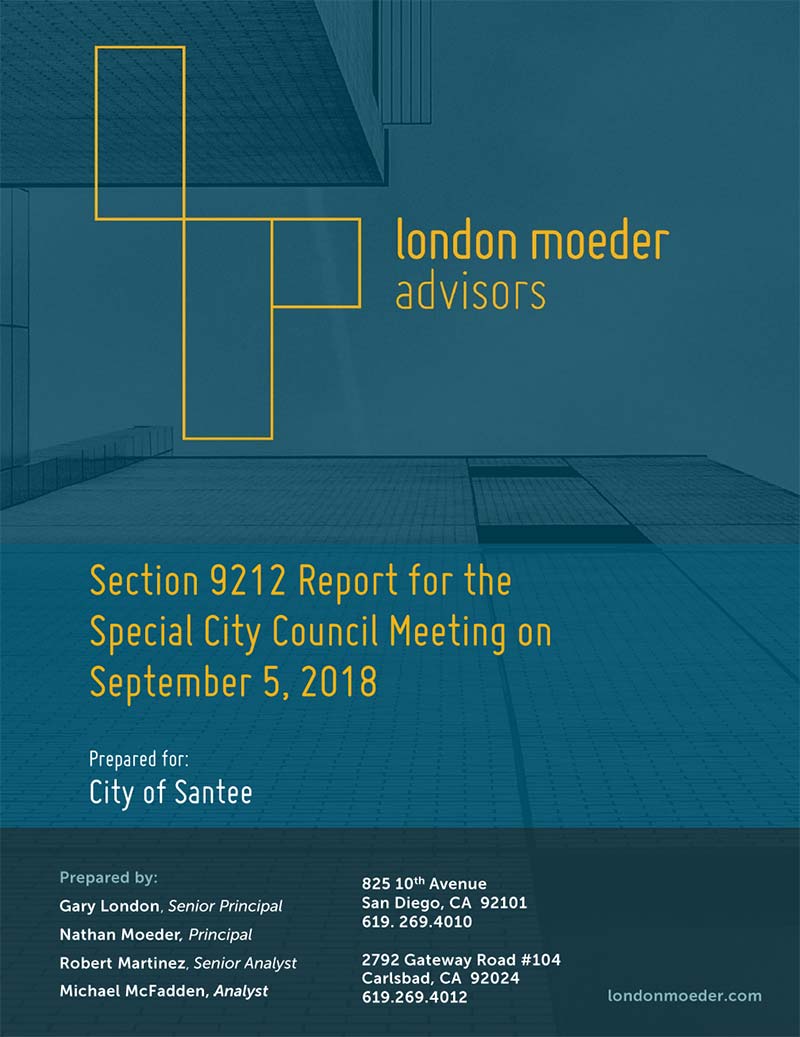 In 2018, an initiative proposing to amend the Santee general Plan came before the City Council. The initiative was created by Preserve Wild Santee with the goal of blocking real estate development in Santee. Council members had concerns about the potential negative effects of the initiative for the City and its residents, so they commissioned a study to analyze the impacts.

Santee will face a shortage in residential housing by 2050 if the General Plan isn’t adjusted to meet the needs of the city and its residents.

Fanita Ranch will provide approximately $132 million in fees to support public services like police, fire fighters and schools, and to fund improvements to traffic, parks and public facilities.

1. How could the initiative change land use and development in Santee in the future?

2. How could the initiative impact the City’s long-term fiscal health?

3. How could the initiative impact the long-term sustainability of the local economy, in terms of the community’s ability to retain and attract business investment and jobs?

1.How could the initiative change land use and development in Santee in the future?

According to SANDAG's projections, Santee will not be able to accommodate the projected future residential or industrial demand on the remaining vacant land in the city.

If the initiative is passed, it will much more difficult to amend the city’s General Plan to address shifts in the economy or meet the community’s pressing needs. One foreseeable result is there will not be enough residential and industrial space in Santee by 2050.

To avoid negative impacts to the city’s fiscal health and residents’ quality of life, the city will need flexibility to address these demands by amending its General Plan, just like numerous California cities have done.

2.How could the initiative impact the City’s long-term fiscal health?

The impact study analyzed a series of possible scenarios. One was, what would happen if the proposed Fanita Ranch project is denied? A likely result of the initiative passing. The study found Fanita Ranch will provide millions of dollars in one-time fees and annual revenue to benefit the City of Santee that would otherwise not available. If the initiative passes, the city would lose out on these funds.

The passing of the Proposed Initiative would decrease significantly the potential funding for infrastructure. Development plans for Fanita Ranch estimate a new total of more than $132 million in additional benefits for the City of Santee.

All of the additional benefit would be realized in multiple infrastructure categories including parks, public facilities, traffic mitigation, schools and infrastructure improvements. These fees would not be available to the city should Fanita Ranch not be approved.

3.How could the initiative affect the long-term sustainability of the local economy, in terms of the community’s ability to retain and attract business investment and jobs?

This ballot initiative would lead to a shortage in housing in Santee, , which could cause potential employers to invest in other communities better able to house the workforce they need.

The proposed Fanita Ranch development would assist with the significant upgrade to State Route 52. This is intended to improve traffic conditions in an already impacted area. Improvements of this scale cannot be achieved without approval of the Fanita Ranch as proposed, or without another alternative funding source.

If Fanita Ranch is denied, the substantial funds the project would provide for traffic improvements on State Route 52 will disappear.

There is no identified alternative funding source for SR-52 improvements, so without Fanita Ranch the current bad state of traffic will remain.

The ballot initiative does not save Santee from traffic and it offers no solutions for an existing problem.